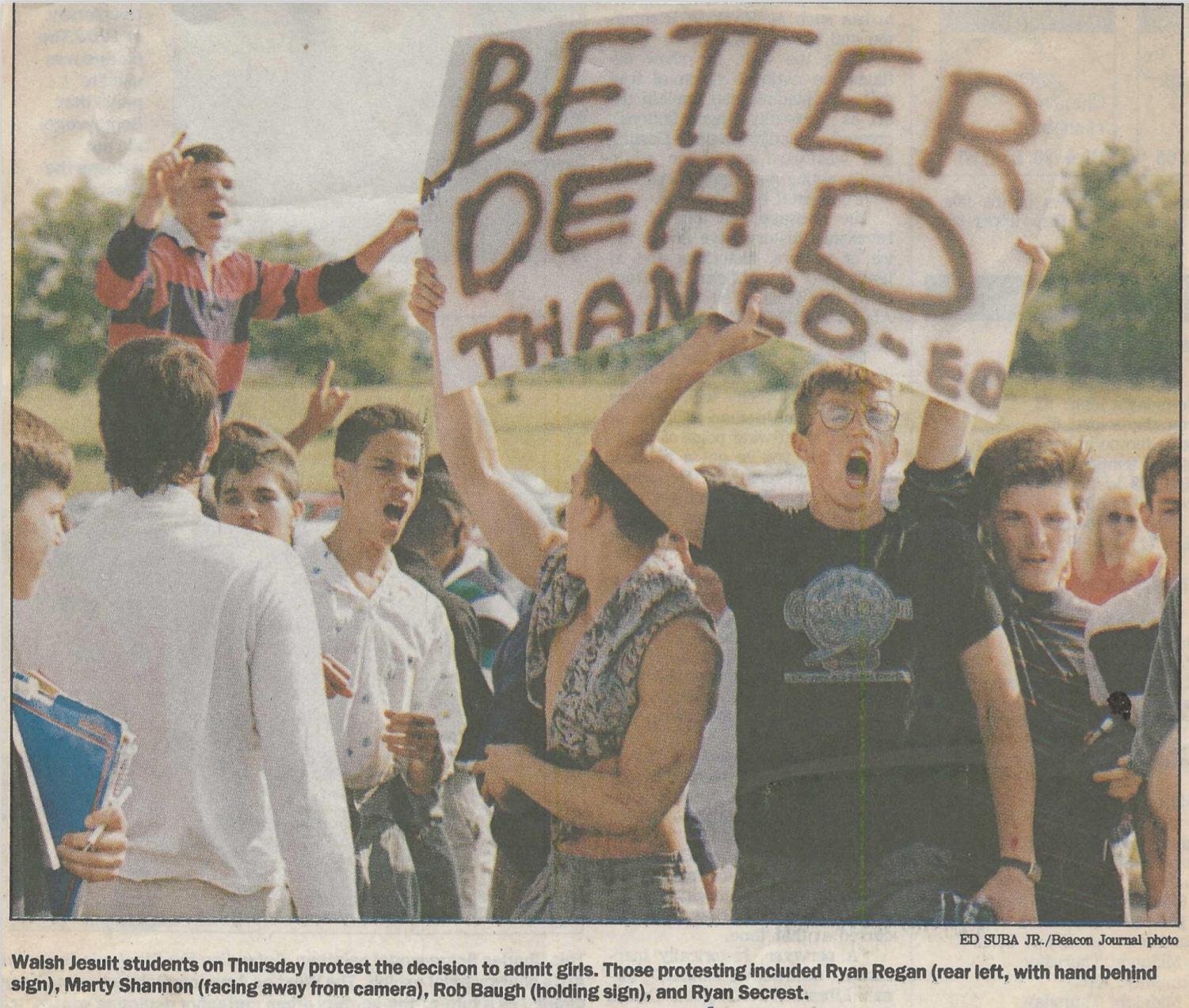 Makeup of the WJ student body changed radically 25 years ago

This now rather shocking slogan was first seen and heard at a Walsh Jesuit student-led walkout in the spring of 1991.

Mr. Sean Lynch, Assistant Principal for Faculty and Student Development, was a senior that year. “Students didn’t find out [that girls would be admitted] until they saw it on the local news. The next day the students were thinking ‘what are we going to do?’ So they decided to have a walkout to protest,” he stated. 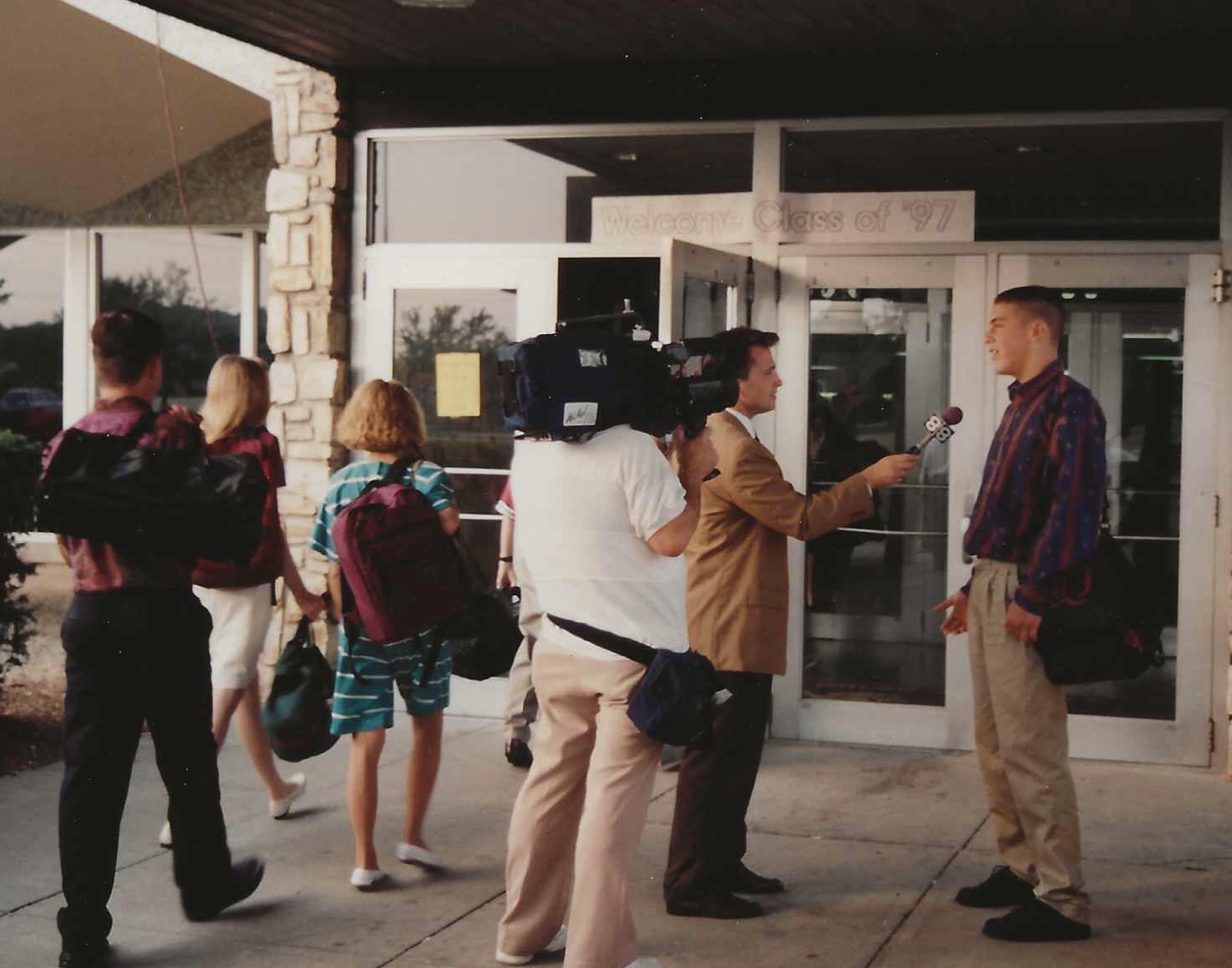 (Photo courtesy of Walsh Jesuit Archives)
Speaking to a local news network, one WJ student shares his view of the school choosing to become a co-educational institution.

Most of the student body participated in the walkout, and that is where the first anti-coed sign, “better dead than co-ed,” was displayed. Senor Gaone, then in his 22nd year of teaching Spanish, recalled, “I think most students wanted to go co-ed, so the major reason students held a walkout was to get out of class.” On a personal note he added, “I don’t like single sex education, and I don’t think it helps in the long run.”

Mr. Lynch believes the school handled the walkout and the students’ concerns very well. “Bill Ricco, principal at the time, came out onto the field during the walkout and calmly said there would be no discipline for the students who left class and that they were to come back tomorrow ready to talk and learn.”

Fr. Petkash was appointed president in the spring of 1992 when his predecessor became ill and had to step down. Fr. Petkash stated, “My understanding is that the decision to go co-ed was based upon parents coming in and saying, ‘You have some empty classrooms, and we have some daughters that would like a Jesuit education. Could you open [the school] up to co-education?’ It was really not a financial decision.”

Little known among the WJ community, the Board had commissioned a study regarding going co-ed as early as 1981. The Board at that time voted unanimously for the school to remain all-male. Another study was initiated in 1989. The vote in ’91 was in favor of moving toward co-education.

Fr. Petkash explained how parents and alumni felt about the decision: “The alumni at the time were very upset.” In fact, some benefactors and alumni decided they would no longer support the school. Many wondered why WJ couldn’t continue its all-male tradition like St. Ignatius in Cleveland. To address concerns, alumni were invited to two meetings with the Board of Trustees. Every seat was occupied. Many wore pins that bore “coed” with a red slash through it. 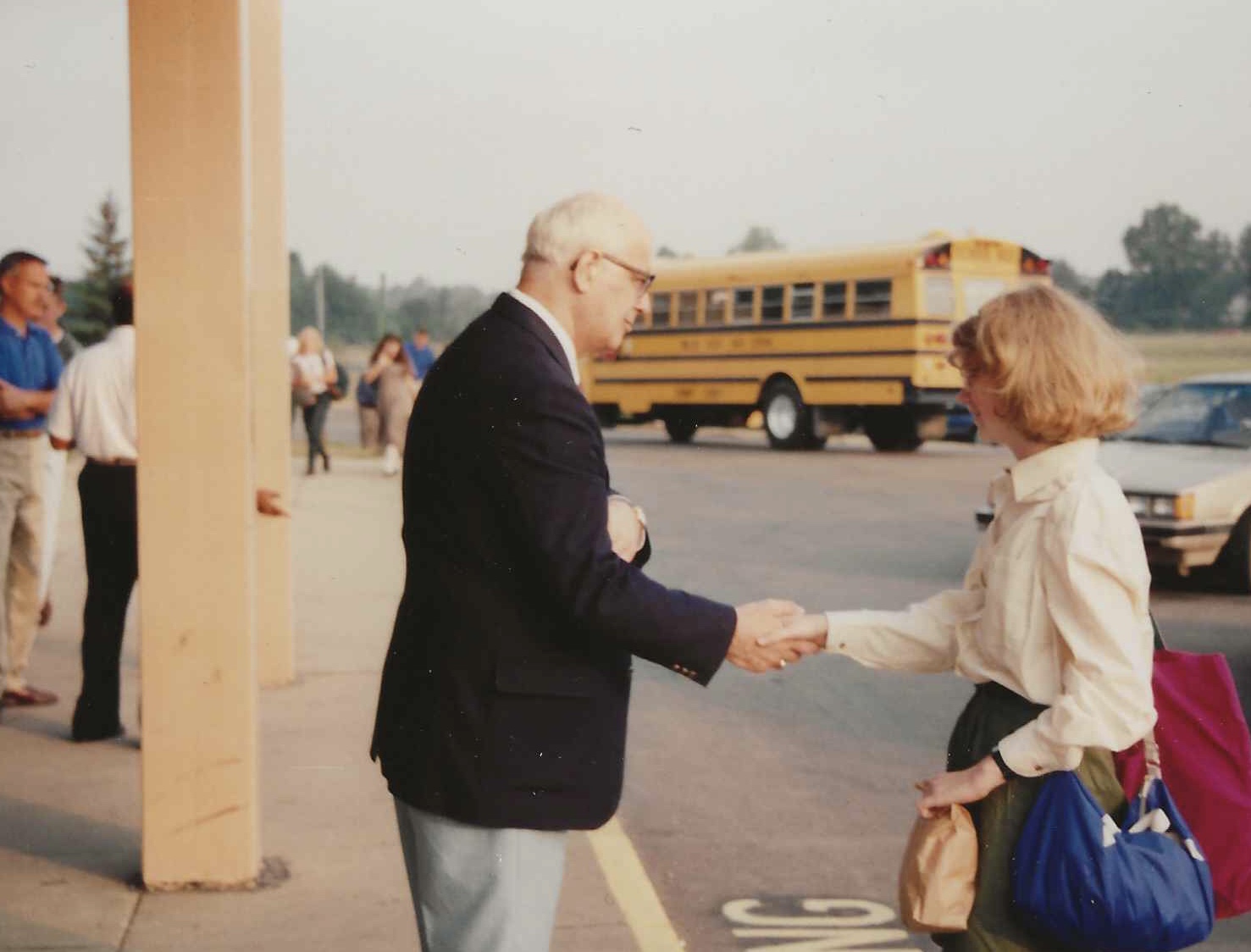 (Photo courtesy of Walsh Jesuit Archives)
Mr. Bill Ricco, principal of WJ at the time of the transition, welcomes a young lady to the community for her first day of school.

“I oversaw the meeting, and we met with anyone who wanted to come. Some alumni said the school was going to lose its sense of camaraderie which they felt in an all-boys setting. Many [others] said they were very happy because they had daughters who would now receive a Jesuit education,” Fr. Petkash stated.

In the end, Father noted, “I think by and large most people have come to see it as a good decision. When [the Board] announced the decision in ’91, they said it would not be implemented until ’93. That allowed the faculty and staff time to prepare.”

Many remember the decision being quite controversial. Gerry Rardin, head football coach during the transition, stated, “I think the school at the time could have done a better job of communicating with [the students].” He also revealed that a major factor in the co-ed decision was financial. “The school had a choice – close down or go co-ed. I think it was a good decision. The all-male atmosphere had more of an edge to it. With a female presence, it kind of calmed everything down. Quite frankly, it became a kinder, gentler school,” Mr. Rardin observed.

Despite the sometimes heated debate within the WJ community, the decision did not impact prospective students. Jason Ruegg, ’96, an eighth-grader when rumors of the change at Walsh began to surface, said, “It didn’t change my opinion because I wanted to come for the type of education I could receive. It didn’t matter if they were co-ed or not. I think it was a good decision.” He mentioned that he and his father were driving past Walsh Jesuit one day and his father, a Hoban alumnus, said, “I you want to go where the best go, go here.” 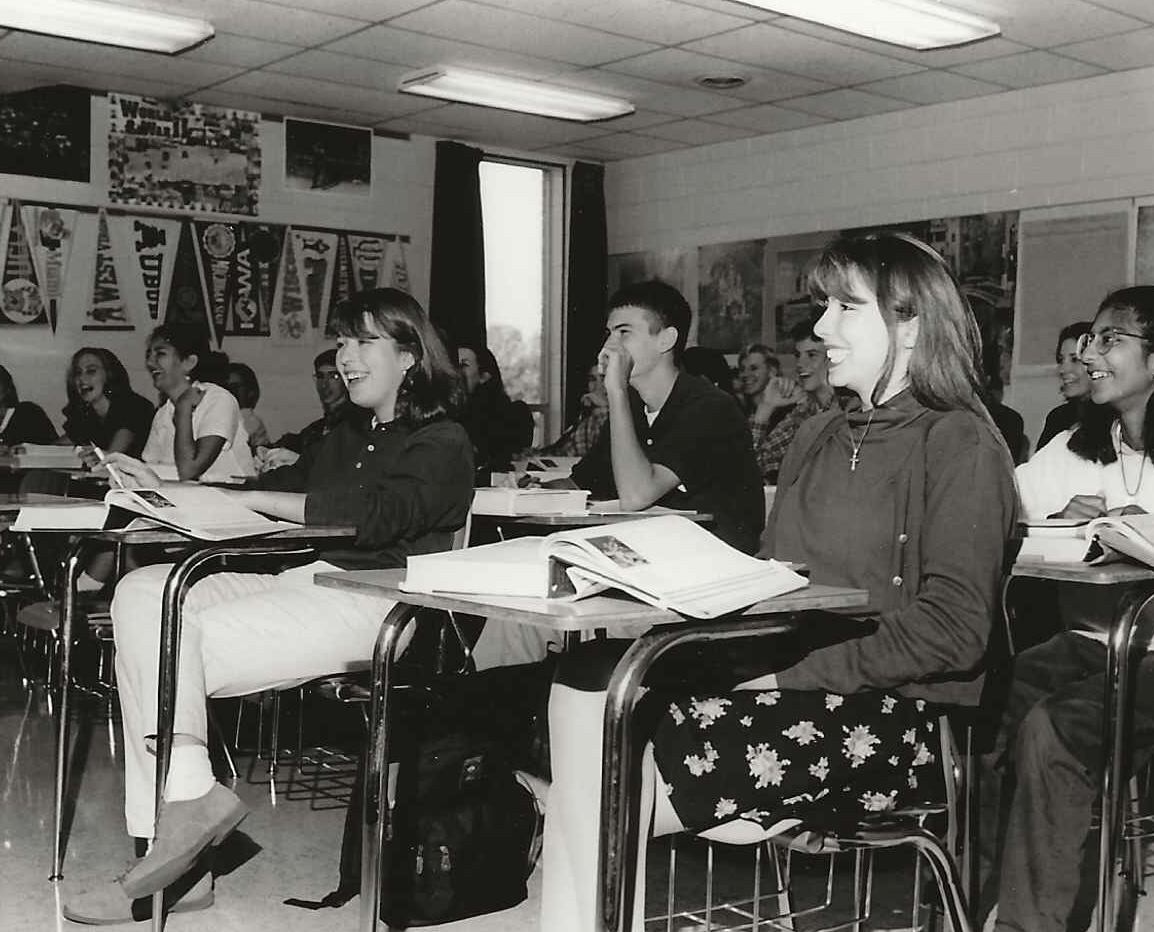 (Photo courtesy of Walsh Jesuit Archives)
The Fall of 1993 saw a radical change in the student body of Walsh Jesuit High School as females were enrolled. The change, difficult for some time, became widely accepted and praised.

The freshman class in the fall of ’93 was made up of a more or less 50/50 mix of boys and girls. About 12 girls transferred into the junior class with a couple dozen more entering as sophomores.

Fr. Petkash had high praise for the older girls who made the decision to enter a predominantly male atmosphere. “It was interesting that the juniors who transferred in were real leaders. They were quite aware they were coming into an atmosphere where there were very few other female students on their grade level, but they enrolled without hesitation. They became very active in the school and became leaders and great role models for the younger girls…It was just wonderful. The curriculum was the same, but ‘the corridors smell better!’ was the typical comment people made.”

Mr. Richard Sistek, social studies teacher, stated, “The transition to co-education was much more like what you could expect on any given day, at any given time, at WJ – an atmosphere of youthful energy, athletic competitiveness, and educational intensity.”