After traveling from Minnesota to join the Walsh Jesuit community, two Jesuit novices have found a place they can call home, at least for a while. Mr. Thomas Arms, n.S.J. and Mr. Conan Rainwater, n.S.J. quickly adapted to their new surroundings.

Fr. Paul O’Connor played a huge role in bringing the novices to Walsh Jesuit and is guiding them during their stay.  Novice directors converse with schools within their provinces to see if hosting a Jesuit novice is a possibility. “[The Jesuits] are ordinary people who decided we could do this,” asserted Fr. O’Connor.

With one Walsh Jesuit graduate having entered the Society of Jesus, the Chicago-Detroit Province and the school have put emphasis on the promotion of vocations. This year WJ has prayed for more vocations, continued the annual talks by first-year Jesuits, and promoted the 1521 Club which allows students, both male and female, who think they have a call to serve God through a religious vocation to talk with priests and novices here. 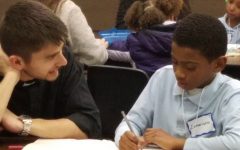 An accomplished swimmer, Mr. Thomas Arms grew up in Forest, Ohio, where he attended Kenton High School and started a school swim team with his friends. He went on to swim at Purdue University where he studied professional flight technology with the goal of becoming a commercial pilot. In 2006 he transferred to The Ohio State University, earning a bachelor’s degree in English with an education certification. Mr. Arms then traveled to South Korea to teach at an international high school for two years and later at a university in Seoul for five years.

Mr. Arms had known since he was around the age of sixteen that he wanted to be a priest. He noted, “If I did not act on the feeling, I would regret it.” The Jesuit order was the most appealing to him because of its dedication to education, the rich spiritual tradition of St. Ignatius, and the idea that the Jesuits go where the need is greatest.

Recently, Mr. Arms attended a Kairos retreat and said that he loved everything about it. Senior Adam Keesy had the opportunity to experience Kairos with Mr. Arms and observed, “Mr. Arms is very sarcastically funny, and he always has a smile on his face.” Both in and outside the classroom, Mr. Arms shares his wisdom, enthusiasm and joy.

Rather than ask God to directly tell me what I should do with my life, I needed to ask who am I, and what is my greatest desire.”

Senior Abigail Rosenbaum, a senior in Mr. Arms’ World Literature class, explained that she is always able to stay engaged in the class because of how “funny and entertaining he makes the class.”

Additional positive experiences for Mr. Arms at Walsh Jesuit include “seeing and being with amazing students and teaching those who are so dedicated to a good education. Because of that I see the potential in each student.” After leaving Walsh Jesuit, Mr. Arms will accompany Mr. Rainwater to Loyola University of Chicago to complete his master’s degree in philosophy.

From participating in speech club, to golf, to skiing, and to playing the trumpet in Hawaii for a parade, Mr. Conan Rainwater has demonstrated that he embraces new experiences in which he can showcase his many talents. But one of his favorite experiences occurred when he was in middle school when he traveled with his family to Ireland. The family woke up at four a.m. to climb Croagh Patrick, a famous mountain associated with St. Patrick fasting on the summit for forty days.

Another second-year novice at Walsh Jesuit, Mr. Rainwater grew up in North Dakota where he became open to the idea of becoming a Jesuit after witnessing his brother, along with other Jesuits, profess their first vows of poverty, chastity, and obedience.

Mr. Rainwater attended Creighton University, a Jesuit school in Omaha, with the intention to study pre-med. However, as the time came for him to study for the MCAT (the entrance exam for medical school), he realized, “Rather than ask God to directly tell me what I should do with my life, I needed to ask who am I and what is my greatest desire.” This marked his call to the Jesuit order.

Mr. Rainwater’s favorite part of being a Jesuit is “belonging to a group of people who are dedicated to following Christ through the vows and the opportunities that arise based on the lifestyle.”

Gerry Knotek, a senior in the Ecumenism and Inter-religious Studies class, noted that he appreciates Mr. Rainwater’s ability to involve the students in discussions. He added, “Mr. Rainwater’s South Dakota accent keeps me interested and focused on what he has to say.” Mr. Rainwater is from North Dakota.

Abigail Grescovich, another senior in Mr. Rainwater’s theology class, said with a smile that the class is her favorite at WJ because of Mr. Rainwater’s “humor and good looks.”

Both Jesuit novices exemplify that men from a variety of backgrounds and gifts are called to become Jesuit priests. Although quite distinct individuals, Mr. Arms and Mr. Rainwater are two amazing young men who display a true love and passion for being Jesuits. 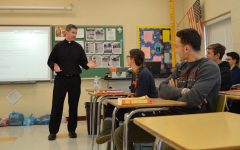